‘The good news is we are sitting on a complete revolution of technology that allows us to  move in a sustainable direction. That’s a matter of choice though… We have to decide on planetary scale, we’re going for a sustainable, green, inclusive economy.’ (Sachs, 2014)

Technological development is happening simultaneously in different contexts: virtual reality, artificial intelligence, robotization, nano-materials, energy-technology and so on. All these developments have significant societal consequences. Digital platforms are displacing traditional companies, computers humans; devices traditional communication and so on. It’s not easy to imagine and understand the consequences of these radical technologies, because hyperconnected technologies are developing faster than our understanding of its speed.

The consequences of new technologies are also often unpredictable. With the advent of steam machines in the first industrial revolution, we got more effective traveling and factories, but also pollution and later climate change; we got rapid urbanisation, both slums and creative cities and we got new jobs for millions of people, but also social and health problems. Carlota Perez claims that significant technologies lead to tensions and crises that slow down achieveng the benefits of them until they are integrated into the societal institutions and new institutions are created. 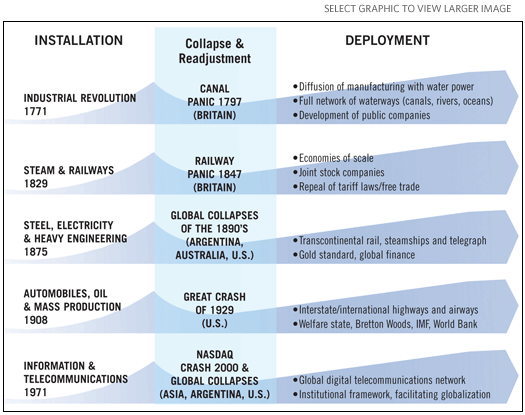 PIC: Carlota Perez describes how significant technologies lead often to crises before the ways to implement them into society is found.

At the brink of fourth industrial revolution, we should be be prepared for the changes and take care that the changes enable people to live a good life within planetary boundaries. And we all should be able to participate in that discussion.